by 1 of - Real Democracy Now! Ireland

It is reasonable, considering the many high profile members of the elite involved in the project, to expect a blizzard of media attention for the 'We The Citizens' initiative to accompany their showpiece Citizen's Assembly taking place on June the 25th and 26th in the Royal Hospital Kilmainham. 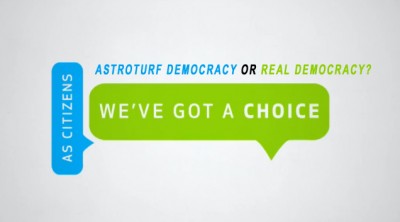 It is quite unbelievable that the bona-fides of those involved, and the methodologies being utilized by the initiative to select a representative group of people for their 'citizen's assembly', have been subject to no public scrutiny whatsoever to date. This is especially so when you consider the fact that so much money is being poured into it.

Hugh Green, in a timely article which is excerpted below, subjects what he refers to as 'Weed the Citizens' to a searching critique. His piece, which looks coldly at the track record of some of the elite team behind the initiative, includes a translation of a report on recent events in Spain which feels (from an Irish standpoint) like a broadcast from an alternative universe. In that universe citizens organize themselves within structures created from the ground up and without help from billionaires and politically connected elite insiders.

The brief and extremely vague overview of the methodology used by 'We the Citizens' for selecting participants makes it apparent that those with the benefit of a good education and the attendant confidence to participate would be favoured by this approach. These are not the kinds of people most likely to be hit hard by the actions of the ECB/IMF financial dictatorship presently running the country.

Weed The Citizens, or I Still Know What You Did Last Lisbon Treaty Vote

As an example of what I am talking about, consider the We The Citizens initiative, which invites people to speak up for Ireland. However, the potential idea that Ireland, however conceived, should have nothing to do with serving the interests of multinational corporations, is unlikely to find favour with the Head of Corporate Affairs, Intel Ireland Campus, who sits on the board of directors.

It is not that this person will be watching over proposals emanating from the citizens (whose role and potential range of actions are established and regulated in advance) and striking them down with thunderbolts, but that the parameters of such an enterprise, on account of the participating individuals and the interests served, are well delineated in advance. We are, once again, where we etc.

Also likely to be excluded from the range of possibilites set forth by We The Citizens is the Euro Pact, which was the theme of Sundays DRY/RDN protests. Let us recall that Intel launched a propaganda campaign in favour of a Yes vote for the second Lisbon referendum. Also sitting on the Board is Brigid Laffan, who was Chairperson of the Ireland for Europe citizens campaign for a Yes vote in the second Lisbon Treaty referendum. It is hard to imagine one of the leaders of the No campaign -Joe Higgins, say- sitting on the board of directors of We The Citizens alongside the Head of Corporate Affairs of Intel Ireland.

We can therefore see quite easily how we are talking about a deliberately constricted form of citizenship, and one that fits perfectly with the hegemonic ideas about politics.

http://www.indymedia.ie/article/100061
Indymedia Ireland is a media collective. We are independent volunteer citizen journalists producing and distributing the authentic voices of the people. Indymedia Ireland is an open news project where anyone can post their own news, comment, videos or photos about Ireland or related matters.