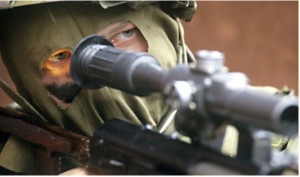 Another leaked phone call. This time between the Estonian FM and Catherine Ashton. It would seem to indicate that the same shooters on the rootops in Ukraine were shooting people on BOTH sides.

People have seen this kind of thing before in previous coups by the west such as the attempted coup against Chavez. It is standard operating procedure, dirty tricks 101.

Related Indy Links: "Fuck the EU" - Conclusive proof that the US is meddling in the affairs of a soverign country | Ukrainian Neo-Nazis Declare that Power Comes Out of the Barrels of their Guns | The Ukraine Deception -Towards the New World Order | Clashes in Ukraine signal escalation of US-EU intervention
Related External Links: The U.S. has Installed a Neo-Nazi Government in Ukraine | Ukraines Democratic Coup dEtat: Killing Civilians as a Pretext for Regime Change | Leaked phone call suggests opposition snipers killed Maidan protesters | US-backed Ukrainian regime mobilizes reserves, threatening war with Russia | The Ukraine: Neo-Nazi criminal state looming in the centre of Europe | Can Washington overthrow three governments at the same time? | Democratization and Anti-Semitism in Ukraine: When Neo-Nazi Symbols become The New Normal Anonymous operations expose Ukrainian Bandera nazis | Reichstag Fire in Kiev | Washingtons Arrogance, Hubris, and Evil Have Set the Stage for War | Obama and Kerry lecture Russia on Ukraine | More than Just an Ally to Fascists: Hillary and Other Assorted Barbarians at Russias Gate Putin Adviser Warns U.S. On USD As Reserve Currency And Crash Of U.S. Financial System | Heard the One About Obama Denouncing a Breach of International Law? | Ukraine: Follow the Energy | Democratic presidential candidate accuses US of provoking Ukrainian crisis | The Rape of Ukraine: Phase Two Begins

During the turmoil of the coup by the neo Nazis in Kiev which happens to be the home of one of the largest viable Jewish communities outside Israel, the synagogues in Kiev came under petrol bomb attack but likely the building didn't burn down. Given the outright racist nature of these thugs and the fact that the coup leaders on the first day of power hung a huge banner of Stepan Bandera the World War II Nazi collaborator who helped send 900,000 Jews to the gas chambers. When those in power celebrate these type of people, it should send a chill down your spine.


For an analysis on how all this colour revolution stuff usually plays out, see article and links at "How To Start A Revolution":
Activist Education at the Albert Einstein Institution: A Critical Examination of Elite Co-option of Civil Disobedience

One time honoured tactic is to fire up an angry mob, then send trained pro shooter(s) on to the rooftops and order them to shoot people from both sides of the protests.

Nothing gets a mob angrier and more panicked than seeing people bleeding and dropping dead around you. The same goes for the forces of law and order trying to keep a lid on a dangerous situation. Result? Like pouring petrol on a fire, both sides lose control and you get what we had in Maidan Ukraine, with both sides screaming accusations at each other and responding angrily and violently. Yanukovich, of course, then predictably got blamed in the western media for ordering the killings, despite his repeated strong denials.

Meanwhile, the well trained snipers who actually fired the shots quietly slip out of the picture.

Question is, who organised these snipers? Was it the Maidan fascists driving the violence that did it or were these snipers part of western / US special forces on a black op?

Google have forced people to sign in before listening to this hacked call. This greatly reduces it's audience, see here:
http://www.youtube.com/watch?v=ZEgJ0oo3OA8

However we found another copy of the call on youtube, we posted the audio and RT did a piece on it too(see below):

Further links on this story worth checking out:

Caption: RT piece on the leak

http://www.indymedia.ie/article/104597
Indymedia Ireland is a media collective. We are independent volunteer citizen journalists producing and distributing the authentic voices of the people. Indymedia Ireland is an open news project where anyone can post their own news, comment, videos or photos about Ireland or related matters.