Scenes turn ugly later as baliffs and hired thugs attack the residents, driving a van into the crowd -see comments for updates 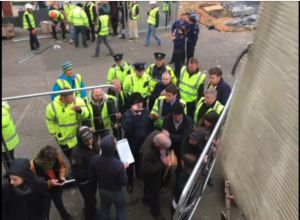 Baliffs, hired thugs and Garda try
to force their way in. Later they turn violent.

A massive eviction is underway in Dublin. It is at the complex of occupied houses and former factory spaces in Grangegorman. Reports indicate that at 7am in the morning a very large number of private security angle grinder their way through one of the metal gates, invaded the area en massed and are erecting barriers (pictured) inside and trying to evict the occupants.

At 6.30 am this morning, around 30 workers broke into a squatted complex on the lower Grangegorman Road that is home to about 30 people. (The space is home to a flourishing community with homes, community gardens and a strong cultural base; including art exhibitions, poetry nights, a circus space and a community kitchen.)

Although no court order had been issued to residents, the gardai assisting in the eviction. One of the houses in the complex has been fenced off by workers, illegally imprisioning some of the residents.

This is yet another example of how the government would prefer empty buildings to stay empty, while the number of families on the streets increases daily. So far the eviction is being resisted by the community.

Update: Grangegorman éviction resistance is still underway with more people arriving down to support all the time.

The residents have managed to get a chain on and lock this huge gat limiting the access bailiffs have to the site. However the electricity has been cut off to their houses so they are asking that people bring down hot food if they can. Raingear and warm clothes are also sought so that people can maintain the roof and gate top occupations.

All sorts of support are welcome, even simply turning up and letting the Garda and bailiffs know that their actions are being monitored.

The footage and interviews we uploaded to https://www.facebook.com/video.php?v=347131162142993 will give you a good sense of what is happening. Please share that video out

People are asked to make their way to the area, its on the street behind the Cobblestone pub at the top of the Smithfield square

http://www.indymedia.ie/article/105324
Indymedia Ireland is a media collective. We are independent volunteer citizen journalists producing and distributing the authentic voices of the people. Indymedia Ireland is an open news project where anyone can post their own news, comment, videos or photos about Ireland or related matters.