This essay was written by Manuel Garcia, Jr under creative commons license and is republished here as it's message needs wider circulation.

Climate change action would kill imperialism, and that is why we cant have it in America.

American political power is based on fossil fuels, and the US military is the engine that consumes those fuels to produce that power. So long as there is an American political elite that craves lucrative personal prestige and the ability to dominate internationally, the US economy will be fossil-fueled capitalism that maintains the military colossus that enables and protects those elite ambitions. 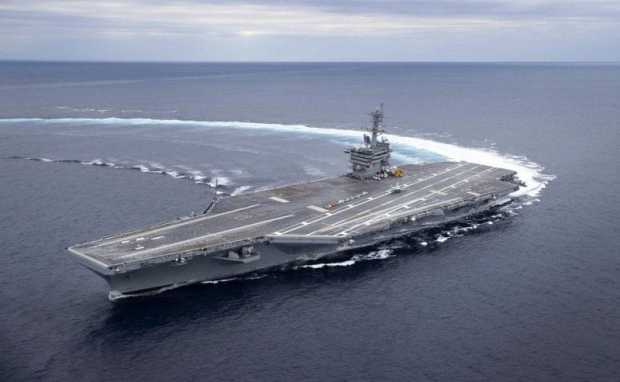 The US has the biggest number of nuclear- powered platforms, such as carriers, but it also consumes hydrocarbons in many other apllications. Much of this ecologically-malignant force is used not for genuine defence but for aggression around the globe, serving the imperial goals of a puny number of plutocrats who have effectively hijacked the American state.
US military-enabled imperial power is of two varieties:

first: the hard power that overtly invades and seeks to control territory to impose American capitalist domination, as for example capturing pipeline routes south through Afghanistan and Pakistanaway from Chinaout of Central Asian oil fields; the guarding of sea lanes crucial for petroleum transport west, as at Suez and the Strait of Hormuz, and east to Japan, Korea and Australia (if they behave); and the securing of scarce metal ore and rare earth deposits in Afghanistan and Africa (for elements used in solid state electronics); and

second: the soft power of buying compliance to US hegemony from client states by gifting them with arms sales that enable them to exercise their own mini-imperialistic ambitions, as with Israels threat-projection in the Levant that is consistent with US aims of regional control, and Zionisms own manifest destiny colonialist mania of persecuting the occupied Palestinians and shrinking their reservations; and with arms sales to Saudi Arabia enabling its genocidal war against Yemen, and giving the U.S. leverage to induce the opulent Saudi royalty to keep oil production high and oil prices low on the world market, so as to grease Western capitalism and also undercut the revenue streams supporting Venezuelan socialism and Iranian economic development.

Because of the fracking (oil shale) boom of the last two decades, the U.S. now produces as much oil as Saudi Arabia and is energy independent as a fossil fueled economy, but hegemonic ambition compels it to seek global control of petroleum distribution because to control the flow of oil around the globe is to throttle the imperial ambitions and economic development plans of all others.

American imperialism, mediated by its military, is intrinsically fossil fueled. It is impossible to power the trucks, tanks, gun-carriages, helicopters, airplanes, missiles, drones, ships and submarines of the US military with solar and wind power; only fossil fuels will do. Nuclear poweralso based on a fossil fuel, fissile uraniumis used to propel particularly large destruction-projection platforms, specifically missile-carrying submarines and aircraft carriers. Military vehicles require high energy-density fuels, to provide a high amount of energy at a high rate of delivery from relatively small volumes of fuel-matter, in order to propel them quickly (and inefficiently) despite the weight of their armaments.

Green forms of energysolar, wind, hydroelectricare intrinsically of low energy-density; they are spread out over large areas from which they are collected rather slowly, rather than being chemically concentrated into relatively compact masses, like coal, petroleum, natural gas and fissile uranium, which can be ignited to release their stored energy explosively.

Local sources of green electrical energy can power civilian infrastructure almost anywhere, because solar, wind and even hydro power are widely available around the globe. All that is required is investment in and installation of appropriate energy collection technology, and a local area distribution network for electrical power. Green energy is intrinsically a socialist form of powering civilization, because the energy to be used locally can be collected locally, which frustrates the capitalist impulse to monopolize narrowly-defined sites of high energy-density fuel deposits  like coal and uranium mines, and oil and gas wells  and tightly confined electrical generation plants that meter out their electrical power through a web of long distance transmission lines.

The United States can only address the existential threat of global climate change by disavowing the imperialistic and self-aggrandizing ambitions of its political and corporate elite. That means deflating American militarism and its vast war industries complex by abandoning capitalism, which is exclusionary (privatized, extractive) fossil-fueled and speculation-dominated economics, and transforming the US economy to nationally and rationally planned green energy socialism: people over profits, an equalizing domestic solidarity over classist international gamesmanship.

Transforming the American political economy to green energy socialism would be very good for the American people, but it would be the death of American fossil-fueled capitalism, and thus of Americas rulers ambitions and privileges.

What we know today is that Americas political and corporate elite would rather see humanity end within a century than disavow its imperialistic and self-aggrandizing ambitions. Their obsession is to rule to the bitter end, a bitter end hastened by their obsession to remain in control. America does not have a robust permanent national commitment to contain, ameliorate and possibly reverse climate change and ecological deterioration because that would necessarily require the overthrow of Imperial Americas capitalist elite and its classist and racist mentality.

The revolution necessary to overthrow American capitalism and enable a national response to the climate change crisis would first require an amazing degree of popular consensus, psychological and intellectual maturity, moral courage, popular solidarity and personal commitment throughout the public, to sustain it through whatever struggle would be necessary to overpower its ruling capitalist paradigm.

Will this ever be possible?, or would any popular American eco-socialist uprising be snuffed out as pitilessly as was the Syrian Revolution? Indy editor (Actually there were jihadists injected by US proxies and then ISIS was also funded, trained and backed by US proxies destroyed the country.) Regardless, is CO2-propelled climate change now so far advanced that it is beyond any human ability to stop? No one can really say.

We are each left with a choice between: defeatist acquiescence to capitalist-dominated climapocalypse, or the dignity of rebellious aspiration and activism for green socialism, regardless of whether or not it will ever be realized politically, and even if it is now precluded by Natures implacable geophysical forces that humanitys blind self-absorption has set into karmic motion
Related Link: https://www.greanvillepost.com/2018/11/21/climate-change-action-would-kill-imperialism/

http://www.indymedia.ie/article/106800
Indymedia Ireland is a media collective. We are independent volunteer citizen journalists producing and distributing the authentic voices of the people. Indymedia Ireland is an open news project where anyone can post their own news, comment, videos or photos about Ireland or related matters.