Premiere Screening of Indymedia Ireland's latest two video productions documenting Bush's visit to Ireland in June 2004 and the protests against it. 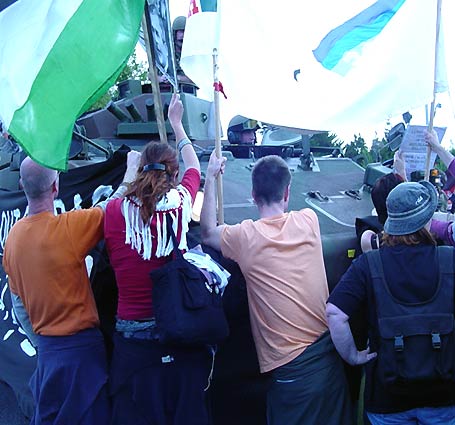 On Friday, June 25th 2004 approximately 20,000 people turned out in Dublin to let George W. Bush know that he was not welcome in Ireland. Thousands also travelled from all over the country to Shannon Airport and the nearby Dromoland Castle (where W holed up while in the country). The Irish State deployed masses of police and military to hide Bush from the protestors while the Media deployed masses of cameras and journalists focused primarily on on grandees and dignitaries in an effort to play down the extent of the protests.

Indymedia Ireland has created two video compilations which focus on the opposition to the Bush visit that was largely ignored at the time by the propaganda machine that has the cheek to call itself the media.

Reclaiming Dignity by Rasta4i and Bush Weekend by indyvidhead include interviews and comments from people involved in the "Bikes Against Bush Critical Mass", the Shannon Peace Camp, the Dublin March, the Anti-War Ireland protest at Shannon, the IAWM protest at Dromoland and, most sensationally, the AmBush protest at Shannon which was confronted by massive ranks of riot police and armoured military vehicles. Despite being completely blanked by the mainstream media this protest managed to delay Bush's departure by two hours.

All of this has been documented by independent camera-people interviewing real people with real opinions, a scarce commodity in the compliant Irish media.

Indymedia Ireland will be holding a screening of these two documentaries about the Bush visit on Friday September 3rd in the Irish Film Institute in Temple Bar, starting at 7:30pm. There will be a 5 euro charge on the door and all funds will go towards sustaining and strengthening the Indymedia project. Come along and support our media - we are all the media.

The 2 Bush Edits were sent to Indymedia New York for screenings during the forthcoming RNC Republican convention in N.Y. City on Monday.

Guerrilla "Video Vigilantes" spawn of a failed mainstream media bringing you the World in crisis.
New technology - a Peaceful, democratic and imaginative use of information technology which strengthens the rebel in all of us, and gives us the chance to stay one step of those we oppose.

Hot off the Press,

indymedia.ie T-shirts for sale on the night 10 euro each, reductions for doleers T.B.A. Also Limited number of Mayday CDROMs available 5 euro each. . Money going towards printing of indymedia end of year DVD release.

But wait theres more! (sad I know, acting like a corporate bastard for one night only)

50 DIVX CDROMs of Bush Weekend Video, Reclaiming Dignity will be sold on the night, those who contributed will get a complementary copy.

Hope to see yous all down there.

Damn i would love to go to the screening but i'm working in hong kong.
Is this gonna be in the room upstairs in the IFI or on the big one?
Hope there'll be a good turn out, good luck.

PS: can any of the indy heads tell me which of my 18 mins of footage you're showing? Cos my original edit was 28 mins. (not that i'm complaining :p)

Full House / Thanks to all who came

And a great reaction to the consistently excellent videos - rock on and up the video crew who showed off their hard work .

I'm still in shock from seeing those Indymedia Y - Fronts on the merchandise stall. Was that real or what?

top night- thanks to all

listen to intro here on how the world is changing, how anyone can be part of it and how it is affecting our lives
http://radio.indymedia.org/news/2004/09/2396.php

content of all vids was top class but so too was the editing- top quality- imc ireland is not 3 years old yet but is already producing such top quality stuff
where will we be in 10 years time?
all schoolkids using the global imc network for help on projects "how to make the world better"

guy working from indymedia chiapas there too gave away imc chiapas rain top and t shirt, money went to buy imc vids to show back in latin america
(tried to add imc-chiapas link but cant get it, anyone else having this problem?)

like to add my own little half minute vid manifesto here
FUSPEY-fun sustainable peaceful existence
http://www.indymedia.org.uk/media/2003/06/273076.wmv

the vid is mightier than the sword

premier man does a bit of liltin

vids were class as were the 2 main international events in ireland:
mayday and bush visit
but there are a few points i would like to make and perhaps should have made last night

my agenda is to point out what is wrong and to act with others to change that.
trying to get more and more people aware of this and with that more people active is very important, as opposed to just the "same old heads"
an example of this-
festival of world cultures was on last weekend in dun loaighre,
could/ should indymedia gone out and set up a stall giving out free copies of printflare, talked with people about the indymedia system and from that got them involved?
yes we could/ should have, a call was put out to no avail, a call was put out for printflares to distribute, again to no avail
http://www.indymedia.ie/newswire.php?story_id=66365&search_text=muralismo#comment85274
and
http://www.indymedia.ie/newswire.php?story_id=66373&search_text=festival#comment85278


when protesting against bush i carried a placard, this was briefly shown on rasta4 i`s vid, thanks for that, i feel these are important issues that we have to communicate to more people, when i eventually reached riot line, when it finally formed after all the rushing and running and dodging i opened up my placard and said, more or less..
"how are ye lads, no violence here, no threat of violence, have you been briefed on some of the reasons that we are taking such drastic action?"........pause
no response, just riot cops staring into distance as they are told to do?
so i outlined some points to back up the points
the placard stated
-7,000,000 people die every year because of UNFAIR trade rules
-bush rejects KYOTO agreement
-help change this crazy world
in smaller print was...
-TROCAIRE asked everybody to go to GENO in 2001to help change the unmfair rules of G8 -WTO - IMF
-MARY ROBINSON said in WTO talks @ cnacun "when you see the rules of how this works (WTO) you cant help but see how unfiar they are"
-nobel econonmics prize winner JOE STIGLITZ who was in the world bank(chief economist) "those protesting aganist WOT, WORLD BANK, are right, it has to change"

i talked with cops, army and civilians along demo outlining topics, i got thumbs up from quite a few cops, many others said, "were against him too, but we have to do our job"
(fair enough but if there was a critical mass of support in favour of not supporting bush things could have been different)

when the cops and armored cars tried to move us on we put on the "black blanket" die in, as best we could, we incorporated it into a piece of street theatre in which we read out the indictment for bushs arrest for war crimes, a legal document put together by
human rights watch or amnesty?
(i am unable to find the document from a quick google search, perhaps the galway grassroots could find it, link it here or tell us more, surprising that there is so little of it on a net search, maybe its an avenue worth pushing?)


heres the brief report of that
black blanket - die in
http://www.indymedia.ie/newswire.php?story_id=65270
and
http://www.blackblanket.com/

as well as this, after the visit by indymedia to the "irish anti war movemnet" agm after bush in which some points were made by IAWM re the downsides of indymedia (ireland) im wondering did anything concrete come from that?
http://irishantiwar.org/bboard/q-and-a-fetch-msg.tcl?msg_id=0002O2&topic_id=1
and our own discussion
http://www.indymedia.ie/newswire.php?story_id=65858

The SWP aren't the problem, its certain individuals within the leadership of that organisation who are just congentially sectarian and unable to get on with broader forces (unless they're non-participating rubberstamping 'broader forces'). Witness how they behaved towars Anti-War Ireland in the build-up to the Bush visitation.

I reckon that minus one particular individual the SWP in Ireland would be much much easier to work with. Do the ordinary members ever get fed up with the sectarianism?"

so thats about it
i will have the "petit cinema" up and running soon, so i hope you can get the relevant equipment for me to do it (laptop, vid recorder, beamer,) i have a screen and plugs, adapters, and long long cable
so hopefully we will have further communication action on the streets
http://www.indymedia.ie/newswire.php?story_id=66073&search_text=france

and on a final note, i belive art gallerys should be the most exciting places in cities.
i believe indymedia and social forum are the 2 most progressive systems on planet at the moment
i put my first 2 audio pieces on line the other day
1-muralismo @ festival of world cultures- 7 mins
http://radio.indymedia.org/uploads/muralismo.wav
2- "modern art is bollox"- half hour disscussion re the relationship between art and activism
http://radio.indymedia.org/uploads/the_red_archive_discussion.mp3
from
http://www.indymedia.ie/newswire.php?story_id=65045#comment85277

this is all constant feedback for the "development of indymedia"

so a i dragged down a few heads last night
maybe some of you could drag yourselves into one of my places
here please:
http://easa.antville.org/stories/887874/
a discussion re art, activism, architecture, urbanism, play, a better world

meant to be above

you asked for printflares?
there available on the web print them out yourself????

dident have facilities or time to get it together, i imagined others had them, old ones, that i could distribute

what are your views re fact that a call was put out to do something at festival and we did not.
i feel this alone shows our problems, we need to outreach, we have talked about it, we dont do enough on that front
so hopefully next time a call goes out, you might have a few printflares, hopefully i will, hopefully more people get involved

http://www.indymedia.ie/article/66327
Indymedia Ireland is a media collective. We are independent volunteer citizen journalists producing and distributing the authentic voices of the people. Indymedia Ireland is an open news project where anyone can post their own news, comment, videos or photos about Ireland or related matters.