Round up of Mayday actions 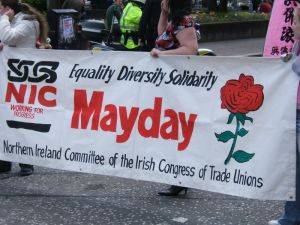 Banner from the Belfast march

Starting with the first Critical Mass of 2006, documented here by Noise Hacker with the usual high quality photography and running until Saturday's Mayday march in Belfast covered here by Ciarán Ó Brolcháin, Mayday in Ireland was spread from weekend to the next. The Dublin trade union march drew the by now standard criticisms on size and promotion and also was criticised for the decision to hold it in April for a change. The Sunday of the bank holiday saw an Anarchist Picnic and Anti-Authoritarian-Assembly in Dublin 's Phoenix park while the Monday saw the unmanageables picnic at the US Embassy.

Elsewhere, the annual call for the EuroMayDay was issued and the Indymedia.ie calendar saw events listed for Sligo and Cork. But much attention was focussed on the nation called America with the Indymedia Ireland newswire seeing reports from our LA correspondent on the massive protests in Los Angeles while regular contributor John Throne gave his report on the 400,000 in Chicago on May Day.

mayday - fires burning to celebrate the pagan feast of bealtaine

dancing at the crossroads - the unmanageables, kids and friends creatively resist the US war on terror

http://www.indymedia.ie/article/75839
Indymedia Ireland is a media collective. We are independent volunteer citizen journalists producing and distributing the authentic voices of the people. Indymedia Ireland is an open news project where anyone can post their own news, comment, videos or photos about Ireland or related matters.