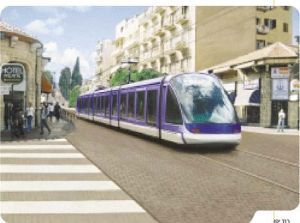 The Ireland-Palestine Solidarity Campaign (IPSC) won a small but significant victory in the international struggle against Connex and the illegal Israeli tramline being built by them on occupied Palestinian territory.

Connex (who in Ireland now operate under the name Veolia) also run the Luas, Dublins light-rail system. The Luas has only been running for a few years and it is likely that the tramline currently being built by Connex in occupied East Jerusalem is a near identical system. For this reason, representatives from Israel had been in negotiations with Veolia Ireland to have Israeli engineers and drivers trained on the Dublin Luas, with a view to then operating the illegal tramline in Jerusalem. The training was due to begin next month, and a contract was being finalised.

But in recent days, Veolia has been forced to cancel the proposed deal with its Israeli counterpart following pressure from Irish trade union representatives, in turn responding to overtures from the IPSC.

An IPSC spokesperson stated: This is a small but significant victory for the Palestinian right to self-determination. This tramline, like the Apartheid Wall, is an integral component of Israels annexation of East Jerusalem. You would expect a tramline to be fairly innocuous, but the lesson is no: when you do business with Israel, you invariably do business with the Occupation. Veolia clearly understand that there is a growing awareness of this within Irish society. People are realising that diplomacy has utterly failed to curb Israeli crimes. We must cut ties with Israel in order to force it to end its Occupation,

The spokesperson further stated, Veolias position, however, is extraordinary. In cancelling this contract, Veolia acknowledge that the Israeli line is illegal and unsupportable. Yet it is they who are building it! The hypocrisy is inexcusable, and their attempts to deny that they bowed to pressure are laughable. Since the Minister for Transport and the Railway Procurement Agency have ultimate control over who runs the Luas, the IPSC now calls on Martin Cullen and the RPA to cancel Veolias contract unless they cease building this illegal tramline on occupied Palestinian territory.

The tramline being built by Connex/Veolia will run between Israeli settlements in occupied East Jerusalem. The settlements, which have been built on annexed Palestinian land, are illegal under the 4th Geneva Convention, and are recognised as such by the Irish government. If completed, the Israeli tramline will permanently link Jewish-only settlements such as Pisgat Zeev, French Hill, Neve Yaakov and Gilo, to Israeli West Jerusalem, thereby cementing Israels hold on occupied East Jerusalem, and ensuring that there can never be a Palestinian state.

The IPSC had initially learned that a delegation from Israel was in Dublin last month to inspect the Luas. Subsequently, it has emeged that Veolia have hosted three Israeli visits to Dublin in the last eighteen months. The IPSC will ensure that there will be no further cooperation between the Dublin Luas and the Jerusalem tram, and indeed we will step up our campaign for the Irish government to cancel Veolias contract. However, the IPSC would also stress that we were completely unaware of the previous two visits from Israel. We thus urge solidarity campaigns, in countries where Connex operates, to contact the relevant unions and determine whether any support or assistance is being given to the Israeli tramline. Clearly, the Israeli drivers and engineers must get training from somewhere, and soon, if they are to operate this line in occupied East Jerusalem. This campaign thus has great potential. If human rights groups and Palestinian solidarity campaigns can ensure that no country will train Israeli engineers and drivers, then perhaps we can help to derail this criminal project entirely.
.
--------------------

Some information on Israels illegal tramline and Connexs role in building it:

Related Link: http://www.ipsc.ie
http://www.indymedia.ie/article/77961
Indymedia Ireland is a media collective. We are independent volunteer citizen journalists producing and distributing the authentic voices of the people. Indymedia Ireland is an open news project where anyone can post their own news, comment, videos or photos about Ireland or related matters.