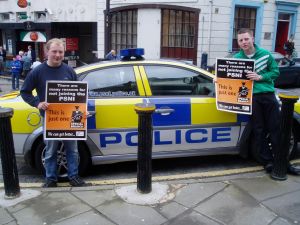 Ogra back to what they do best

When Sinn Féin signed up to the Good Friday Agreement, their republican critics predicted it'd mean the continuation of British rule in the six counties. Inevitably this required the dismantling of the Republican Army, the decommissioning of its weapons, and acceptance of the states monopoly on policing and violence.

But accepting the British police, even a reformed one, is proving to be the most difficult of steps for Northern Republicans. The conflict grew out of the injustice meted out by the state and republican distaste for the police remains great. Contrary to the usual expectation that the Sinn Fein leadership can easily steer through any policy change concerned with the peace process, their youth wing in the article below has joined other republicans in criticising the shift on policing.

The primary role of western-modelled police forces (as opposed to services) is to put back into place those who move beyond their remit. The police belong to an intricate system of governmental control encompassing, the judicial system, state prisons, the media and the statutory bodies. Their desire to protect and serve citizens is questionable.

A move on policing in terms of the latest negotiations will not give republicans the power to collapse the corrupt institution of the RUC from within. We will not wrest the important aspects of state control from the British government.

While our people and communities need safety, the limited devolution of policing powers to the assembly will not achieve this nor create accountability within this force. Having limited control of a strong arm in society does not, has not, and will not alleviate the causes of crime. We must understand the social and primarily economic causes of most crime before attempting to address it.

The potential setbacks for the struggle cannot be underestimated if we give credence to such a failed system to clinch a short-term deal with right-wing unionists and the British government. The pitfall within the current debate is its parameters. We cant allow ourselves to be reduced to a discussion on reform of a British system. We must debate how we can develop and implement a policing and criminal justice model for Ireland now, or in the future. To do so we cannot put the noose of this failed system around our necks.

How do we deal with the ongoing policing and justice void within the country caused by British occupation in the north?

How do we challenge the economic and social inequalities intrinsic to both states and the corruption and ineptitude that characterises both regimes?

How do we rectify the social and economic ills that affect our communities, indeed all of society?

Firstly we must reject the failed model that is western policing and maintain our integrity as Irish republicans. We should recognise that crime is multi-faceted and challenge it accordingly; that the archaic, draconian, Christian model of crime and punishment in this country does not and never should apply within a civilised progressive society. It simply does not work.

Why are the vast majority of prison populations from multi-deprived backgrounds and, in most cases imprisoned for crimes against people from the same background? Yet there are very few white collars in Maghaberry, Brixton or Portlaoise. Do the police deal with real crime or simply with controlling ghettos? In truth there are no greater crimes than those perpetrated daily by the Shell oils, Coca Colas, and Sellafields of this world yet these institutions are not effectively policed at all.

The challenge that faces us is that we are trying to wrest national sovereignty including control of the policing and justice structures from Whitehall and Leinster house and give it back to the people of Ireland. We must be bigger than the narrow debate surrounding policing.

Crucially, we as republicans are not to blame for the fracturing of our society by crime, poverty, politics or ineptitude. Taking a position, however strong, within this system will not help us change the situation. Republicans cannot solve the policing issue by becoming the police within this system.

We should tackle the issues and not try to effect cosmetic change within a British controlled and irreformable model of policing. We must find an alternative to the western norm of policing and control; a system that benefits society and deals with social harm at its roots. Our answer must be to invest in community development and to instil a preventative ethos, rather than chasing the wild goose of policing reform.

Safety, civility and cooperation is more than having ownership of, or access to, a body that can punish the wicked. The resources exist in this country to address societal failures but have not yet realised their full potential. Many of the resources of community empowerment are at our disposal; CRJ, the safer neighbourhoods projects, a litany of community/youth organisations and voluntary sectors. Our communities are capable of accepting a revolutionary initiative if they are participants in its creation and stakeholders in its success. We should not fall victim to the simplistic analysis of a police force equals order and safety.

We also cannot bow to the pressure to make a hasty and ultimately counterproductive decision. The decision on policing and criminal justice has the potential to set back or completely derail any radical change. It also has the potential to assimilate the republican movement into the institutions were committed to replacing. It would be a massive republican misjudgement.

We will become part of the problem not the solution. Our energies would be much better spent dismantling the failed apparatus of security and policing and dedicating its vast wasted budget to community strengthening measures, creating strong, independent, proud, organised, politicised and educated communities.

We cannot say yes to policing for short-term political gain. We must put forward a completely different, multi-faceted, long-term and transparent strategy. We must seek investment in and encouragement of preventative measures. We must expose state ineptitude and unwillingness to deal with the root causes of crime and also the real remit of police forces.

The debate that has begun is too narrow. We must not allow ourselves to enter the debate at this level. This is not a decision that can be taken within the narrow confines of reform or Patten or on a quid pro quo basis in negotiations. No one in the country is unaffected by this issue therefore no one should be left out of the decision making process.

We should rise above the media hype and state promoted hysteria. If we have political strength and political support, this is where we have to use it. We have an obligation to consult with, inform and then act on behalf of those people. We must give ownership of the policing question to society itself and allow the stakeholders to express what they would find acceptable - Hopefully a new and revolutionary social justice system.

Let us begin to collate their views and inform them of our own and move forward in a real debate about policing.

"Those who own your lands will make your laws and command your liberties and your lives." James Fintan Lalor


http://www.indymedia.ie/article/80052
Indymedia Ireland is a media collective. We are independent volunteer citizen journalists producing and distributing the authentic voices of the people. Indymedia Ireland is an open news project where anyone can post their own news, comment, videos or photos about Ireland or related matters.