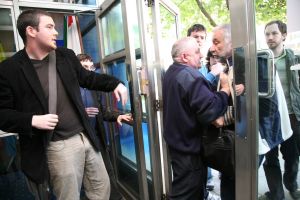 "Today, a dozen activists conducted a direct action to highlight the European Unions support for 40 years of Israeli occupation of Palestine. We tried to peacefully occupy the EU Commissions office for 40 minutes, one minute for every year of occupation. "

In a report filed to the Neswire today, DavidL from the IPSC stated: "The EU supports the occupier and punishes the occupied Specifically, we were protesting against EU policy of enforcing sanctions on the Palestinian people in the Occupied Territories, while offering major trade privileges to Israel, the occupying power. The Euro-Mediterranean Association Agreement offers trade and other privileges to Israel, which helps it sustain its economy and maintain its occupation of Palestine. This is despite the fact that Israel is in clear breach of the human rights clause of this agreement."

EU opposed to occupation of EU shock!
We hoped that the EU Commission would have no cause for complaint for our 40 minute peaceful occupation, since they have happily acquiesced in 40 years of military occupation of Palestine by the Israeli army. However, our luck was out. After the first few activists had entered through the locked doors of their public information centre on Dawson Street, they refused to let any more in and promptly called the guards to clear out the activists inside.

The guards arrived immediately, and shoved the remaining activists out to the street. There, we continued our demonstration for the allotted 40 minutes; our message that the EU should stop supporting Israeli occupation got a friendly reception from passing pedestrians, and an enthusiastic one from honking motorists.

So, we have learnt that the EU is against occupations, unless that is, they are carried out by the Israeli army. The speed with which the EU Commission used the forces at its disposal to end this small and peaceful occupation only serves to highlight its failure to attempt to end the somewhat more serious forty-year occupation of Palestine.

Protest the Occupation!
Next week marks the 40th anniversary of the Israeli invasion of the West Bank and Gaza Strip. There will a series of events around Ireland to mark this, culminating in a demonstration on Saturday 9th June, part of an international day of action against the longest military occupation in modern history. The demonstration will assemble at the Central Bank, Dame Street at 2 pm on Saturday 9 Jun. Join us to protest against the occupation and the failure of the EU and Irish government to bring pressure to bear on Israel.

http://www.indymedia.ie/article/82834
Indymedia Ireland is a media collective. We are independent volunteer citizen journalists producing and distributing the authentic voices of the people. Indymedia Ireland is an open news project where anyone can post their own news, comment, videos or photos about Ireland or related matters.