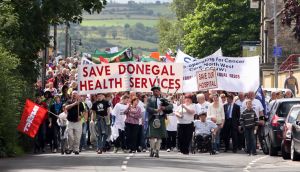 Thousands marched to defend health services at Letterkenny hospital from going under the knife. Anger and hurt was clearly evident on the streets of Letterkenny as pensioners and workers most vulnerable to any cuts in health services brought traffic to halt.

From the save Donegal health Services campaign:

"The Save Donegal Health Services today called upon the government to listen very carefully to the thousands of people who spoke with one voice today calling for a change of strategy by the decisions makers in Ireland on the lack of funding for our health service. Thousands of Donegal people shouted loud and clear they will not tolerate further cuts in health services in Donegal. We call upon all political representatives to heed the peoples voice, because if they ignore them it will be at their peril.

Our group which is not even two weeks old came together out of a shared sense of anger and frustration as to the effects of the cuts already in place, the impending cuts for this year and the threatened 600 million euro to be taken from the budget to keep Irish people alive. stated spokesperson for the group Martin O'Rourke SIPTU and Impact concerned about the savage cuts in Home Support Service, the Review of Lifford, the Shiel and the Community Hospitals, the proposed privatisation of the Laundry Service, the loss of services in the hospital and the loss of around 100 jobs with the resulting loss of many additional services in the county.invited the IMNO , all the local health campaign groups and also invited all the Donegal Oireachtas members to this important meeting in the SIPTU Office in Letterkenny to best determine how we might save Donegal lives and cease the pain and human misery caused by the savage health cuts.

Only two members of the Oireachtas made them selves available for the meeting Senator Pearse Doherty of Sinn Fein and Dinny McGinley TD of Fine Gael. Both politicians stated they were not present to score political points but were there to best ensure Donegal People were in a position to have an adequate health care system. Both political leaders have given their time, energy and commitment freely and have refrained from making party political statements on the health issue since joining "Save Donegal Health Care". Added Mr O'Rourke.

The Save Donegal Health Care Committee which was formed at that meeting have agreed to be a non political community based organisation with the objective of securing an adequate health care system in Donegal and ensure the people providing that care were treated with dignity and respect. However we are also mindful it is politicial decisions which decide how many people will die on waiting lists added Mr O'Rourke Today with the turnout of Donegal people in their thousands the committee became a peoples movement with a shared objective of securing a health care system worthy of Donegal people.

The Committee would like to thank all the people who gave their afternoon to ensure the committee is best placed to shape a better more adequate and fairer health care system in Donegal. We thank all the right thinking people who gave up their Saturday to help us build a better future for Donegal. We intend to meet early next week to agree stage two of the campaign, among the items under discussion will be a public meeting where all political parties will be invited to send a spokesperson on what their party strategy is to reverse the cuts and to ensure an adequate health care system. "

Paula, an organisation of each protesting group needs to be formed, as individual protests are being ignored by scary mary harney and her friends in government. A major public protest needs to be organised as the pensioners did.
Ian Paisley shut down the north of Ireland with a general strike and achieved his aims but we seem incapable of doing the same in the south because all our protests are small and they do not affect the people that are ruining the Nation with their greed and coruption.

Well done to the organisers of the march.
I agree that unity is necessary. There was controversy over the fight to save breast cancer services when people from Letterkenny got into bed with Mary Harney and swallowed her promises hook, line and sinker. One actually was rolled out to congratulate Harney when services were moved from Sligo. Beware the coffee morning hanger oners. Unite to save our health service.

I would question whether we need more doctors, nurses and so on. I would prefer if people took more responsibility for their own health and that we invested more education and prevention. Have a look at the Cuban model.
Think outside of the box!

Too many doctors? Really?

So 'nature doctor' ".. .would question whether we need more doctors, nurses and so on. I would prefer if people took more responsibility for their own health and that we invested more education and prevention."

That's not the question I asked after waiting 15 hours with a patient with a broken leg who was left sitting on a wooden chair in the Mater out-patients last Saturday. And there were others waiting even longer. There was just one orthopedic doctor on duty and a handful of nurses trying to the work of at least double their number.

Yes, let's have less of them. Sure won't responsible patients go next door to the Mater Private and as for the rest, forget them. Maybe the patient I was with should have educated herself not to get knocked over on the street and suffer a broken leg?

The economy doesn't need the less well off injured, sick or elderly at present. So, let's get real. Can we really afford a decent health service, which includes preventative strategies, when there are billionaires struggling to simply keep their swimming pools heated?

I sympathise with your situation but I was referring to general hospital admissions. It's not a case of rich and poor so let's get over that.
My point is that in general terms, people do need to take more responsibility for their health and not be passive consumers of the pharma-led service we now have.
I do believe we have a doctor-dominated system and not all people need to go to hospital, which is about the most dangerous place to be( see Ralph Nader). Iatrogenic illnesses are a huge problem, even in cases where the correct medication was taken.
I accept your experience of A&E. I too have had a very similar experience but that is not the issue I was attempting to address.

The Power of The Medical Card .

by Sceptic. - None Whatsoever

Theres a lot of truth in the comment about people taking more responsibility about their own
health , having said that a friend of mine who has retired recently is already complaining about
his ' new fangled ' medical card , i met him in town the other day , giving out , as per usual when
his arid sense of humour was in full flight , he maintains his health has gotten worse since his
medical card was ' awarded ' to him , he also said since going to his new G.P. he has been sent
for blood tests , x rays etc , and his results have shown up various medical complaints , and is
quite adament in returning his medical card to the H.S.E. & go back on the drink and smokes .

Maybe he has a point .

I note , by recent photos how ' Meatloaf Harney ' has been to the barbers shop to give us a peep at
her new look , for such a person who has not even had the distinction of a mandate from the irish
electorate it just goes to show how utterly thick we are .

To have Meatloaf 24/7 ruining our health service on a nixer basis we deserve everything we are not
getting and more .

Wake up you fools and kick the fucker in the same place she is kicking you ...

We must be the laughing stock of U-R.I.P.

http://www.indymedia.ie/article/97382
Indymedia Ireland is a media collective. We are independent volunteer citizen journalists producing and distributing the authentic voices of the people. Indymedia Ireland is an open news project where anyone can post their own news, comment, videos or photos about Ireland or related matters.