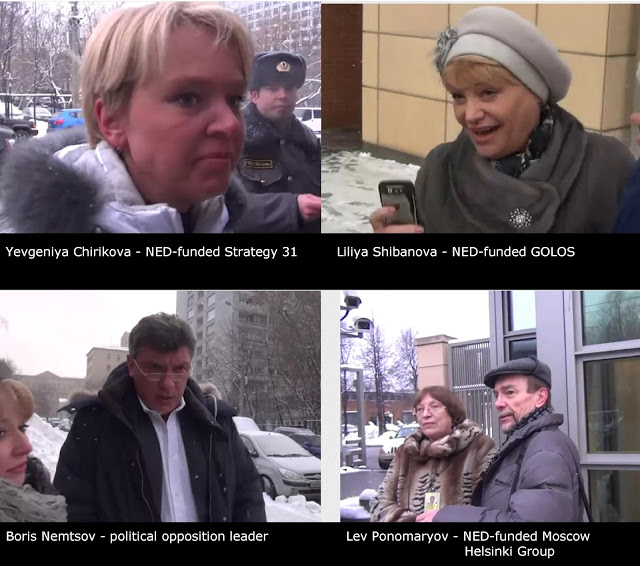 It has become clear that NGO's in Russia have ties with NED and the Orwellian titled "Freedom House". Russia has taken much flak for placing immense restrictions on foreign-funded lobby groups and NGOs, demanding that they exhibit the same level of transparency and honesty that they themselves demand of the government. Evidence has come to light that they were probably correct to do so. Clearly foreign funding and their links with NED and other organisations play a major part in how these people have operated in Russia.

It seems the NED backed "colour revolutions" and movements bringing so called "democracy" to countries like Libya, Iran, Yugoslavia, and now Syria, etc were also planned in Russia. Lots of NED funded NGO's and protesters have been active in Russia for some time. Now Russia's new transparency requirements have made this much more difficult. Taking a closer look at some of the people involved reveals the links with NED and their foreign funding and hence the true motives of some of these NGO's

Quote:
Alexei Navalny - US funded "activist."
Saturday, December 15 saw a disappointing show for Western-backed protesters in Moscow - with estimates of only a few hundred showing up. Led by faux-Communist Sergey Udaltsov and confirmed Western-funded opposition leaders Alexei Navalny, Ilya Yashin, and Boris Nemtsov, even the Western media had to admit the momentum they had hoped to incite is failing to materialize.

AFP's "Year on, Russian opposition subdued but not defeated," and Washington Post's "Thousands protest against Putin, but opposition momentum has slowed," despite unqualified attempts to embellish the size and strength of both the protest and the opposition in general, reflect the winding down of Western attempts to foment chaos across Russia. While the Washington Post cites Russian President Vladamir Putin's "co-opting" of opposition issues, by actually addressing legitimate concerns regarding his government, there is also another dimension that is more muted.

The Russian Battle Against Foreign Subversion.

Reuters alludes to other possible explanations in their article, "No Russian revolution after a year of protests," stating:

Putin was elected to a six-year third term in March and the parliament, dominated by his party, has pushed through laws which critics say can be used to stifle dissent - tightening controls of the Internet, imposing new checks on foreign-funded lobby groups and broadening the definition of treason.

Indeed, Russia has placed immense restrictions on foreign-funded lobby groups and NGOs, demanding that they exhibit the same level of transparency and honesty that they themselves demand of the government. Foreign subversion, however, requires a degree of deceit and exploitation toward targeted segments of the population. Subversion will not work if its agents are required to state on all their pamphlets, websites, and signs that they are foreign-funded - and predictably both the US and the opposition it has contrived inside Russia, derided the pro-transparency legislation.

This is what Reuters categorically fails to mention - that the entire so-called "opposition" is in fact foreign-funded, with at least one of Saturday's protest leaders, Boris Nemtsov, earlier this year being caught slinking into the US Embassy for a secret meeting with then newly appointed US Ambassador to Russia, Michael McFaul

US Ambassador McFaul himself has chaired the US National Endowment for Democracy and Freedom House, both of which directly fund and support many amongst the "Russian" opposition.

http://www.indymedia.ie/article/102892
Indymedia Ireland is a media collective. We are independent volunteer citizen journalists producing and distributing the authentic voices of the people. Indymedia Ireland is an open news project where anyone can post their own news, comment, videos or photos about Ireland or related matters.