Some welcome perspective on the North Korean situation

A lot of hype in the MSM lately about North Korea. These two clips from the RT show "breaking the set" with commentators from answercoalition.org give some much needed context and background from which to interpret the current media spin. Instead of a seemingly irrational belligerent nihilism, the North Korean statements in context, become more like a rational defensive response to a systematic aggressor bent on harming and undermining their country and it's tendency to socialism. You may find some of the facts that emerge about North Korea rather surprising.


RECENT LINKS: [more will be added as situation unfolds, most recent first] 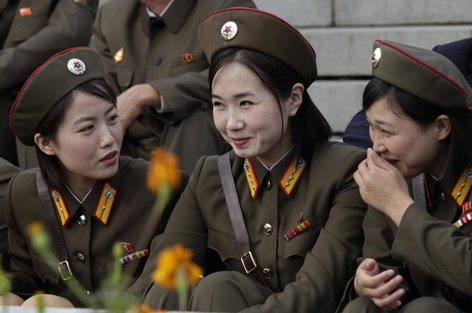 it's pretty hard to find an image of North Korea that's not just more western propaganda.
Guess what, you wouldn't think it from the MSM, but people actually smile in the DPRK too!!

To complement the above there is a good analysis over at the WSWS site. The opening paragraph sums it up nicely:

Fears of war remained high on the Korean peninsula, amid continuing military exercises by both the United States and North Korea, after revelations Thursday that the crisis was following a playbook of US escalations prepared months ago by the Obama administration.


Obviously the way the main stream media is playing along with this script shows how much they are simply are part of the power system.

Interesting stuff in the article. The author has no belief in the NK regime but exposes the US shenanigans

In fact, the reactionary Pyongyang bureaucracy would be eager to re-establish ties based on exploiting the cheap labor of North Korean workers to build up an export industry. However, it has not been able to negotiate an agreement with all the major powers on how to carry out such a shift in policy, given the explosive geo-strategic conflicts in the region. Moreover, there are fears in sections of the regime, notably the army, that the abandonment of Pyongyangs current Songun military-first policy would come at their expense.

It appears that the US escalation was in part also aimed at showing South Korea and Japan that Washington remains committed to exercising military hegemony in Asia. One US military official told CNN, Eyebrows started to go up when it was clear that Foal Eagle was going to be protected from the budget cuts of sequestrationa series of US government spending cuts that went into effect in March.

That is, while trillions of dollars in long-term cuts were being forced on American workers, causing mass furloughs and cuts in essential social services, Washington was careful to maintain its ability to wage a devastating war in Asia.

salon has an ok article

Salon has an ok article too.

Over the weekend, US officials continued to threaten North Korea with war, demanding that China cut off its support to the regime in Pyongyang.
This comes after weeks of US threats aimed at Pyongyangs nuclear program, during which Washington flew nuclear-capable bombers to Korea to demonstrate its capacity to wage nuclear war against the North. Last week, US officials revealed that these moves were part of a laid-out playbook of US escalationsaimed to terrorize North Koreas government and population.

General Walter Sharp, the former US military commander in South Korea, told Americas National Public Radio (NPR): theres been a lot of effort over the past two and a half years now to build this counter-provocation plan. Because thats a hard balance of a strong response: dont escalate, but be prepared to go to war.

Sharp said that US and South Korean forces would rapidly respond to any firing along the border by the North Korean and prepare for an overwhelming response. He explained, There are options that people have worked and thought through that could very quickly be brought to President Park [Geun-hye of South Korea] and President Obama.

NPR commented, Thats the escalation scenario, and it leads to all-out war.

With US military pressure and Libyas fate in mind, North Korea has a good reason to beef up its nuclear arsenal as the only deterrent against NATO warfare, RT contributor Afshin Rattansi believes.

RT: US Secretary of State John Kerry starts his Asian tour with South Korea and then Beijing. He'll be meeting with the Chinese and South Korean leaders, and the head of NATO - doesn't this look like bad timing? Or is it a last-minute scramble to try to find a diplomatic solution?

Afshin Rattansi: We have had the G8 foreign ministers meeting here in London and I have to say its quite surprising that both Russia and China seem to be in step with the Americans. We have to remember there are missile tests going on in Britain, nuclear missile tests. I dont see anyone trying to sanction Britain.

John Kerry and the US government are spreading all this fear now and we must remember it was the US who started putting stealth fighters in Guam, just destroying the six party talks. And also just remember the context. In the 50s, the US killed 20 per cent of Koreas population and destroyed 85 per cent of the buildings in North Korea This is a situation thats getting out of hand and all it takes is a phone call from President Obama to calm it down.

RT: The G8 foreign ministers today condemned North Korea's threats and its nuclear weapons program. And yet they offered no solution either to this standoff. What could world powers have done to prevent this situation from ever arising?

AR: I suppose there is another game being played because the US is ramping up its military facilities in Southeast Asia and obviously its foreseeable that China will become a super power. And Kim Jong Un said one month ago, and repeatedly, we dont want war. We want to talk America left the non-proliferation treaty. Britain isnt obeying by the spirit of the non-proliferation treaty of which its a signatory.

And what we need urgently is for President Obama to make this call, but as in so many other foreign policy issues, president Obama is wavering, looks weak about it, and seems to just continue to carry out these war games on the coast. If you think of it the other way around  if North Korea was putting nuclear capable stealth planes just beside the United States and it had previously killed 20 per cent of the US population  we can see why Kim Jong Un and North Korea are afraid of US barbarism.


Related Link: http://rt.com/op-edge/north-korea-reasons-us-barbarism-725/
Sick of the same crap on the news

Isn't it funny, when discussing this, the MSM show footage of NK army and their huge missiles etc. Yet those huge missiles are just conventional creaky old ex russian tech. They aren't even certain that NK actually possesses a delivery system capable of delivering a nuclear missile to the US mainland as they lack miniaturisation tech. and the range of their rockets is poor. They may not even have a working nuke at present for all we know.

However, they never show any of the 7000+ nuclear missiles on alert in the US. Each of which is a large multiple of hiroshima and can be delivered to any city in the world. Lets see more footage of the huge US arsnel

All NK want is a peace treaty which they have been denied since the Korean "war" where 25% of their population were bombed to death by the US.

US refused to sign such a peace treaty. And they go on about the poor people living in NK with no access to proper medical supplies and food, while at the same time crushing them with sanctions. How two faced!!

Basically, the BBC embedded biased reporter Sweeney with a group of UK students in North Korea without their consent or knowledge with the object of making an anti North Korea propaganda documentary. Needless to say, North Korean Authorities, who gave permission to students for visit were not amused to say the least.

http://www.indymedia.ie/article/103501
Indymedia Ireland is a media collective. We are independent volunteer citizen journalists producing and distributing the authentic voices of the people. Indymedia Ireland is an open news project where anyone can post their own news, comment, videos or photos about Ireland or related matters.