by Paul Lynch - Shell to Sea 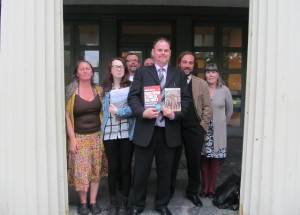 The trial of two Mayo men accused of violent disorder and damaging property at the Shell Corrib gas project tunneling site in June 2013 continues in Castlebar circuit court.
On Friday four Shell security guards gave evidence to the court and were cross examined by the defence.

"They are good people" - Shell security boss on protestors

Jim Farrell - part owner and director of the Shell contracted IRMS security firm - was first to give evidence.
He gave evidence that he was on site at the time of the alleged incident and that it was around the time of the G8 summit so decided to be there.

During interactions with protestors he said that: ... My entire PPE with the exception of my gloves got torn from my body.

In what appeared to be a Freudian slip he said that he contacted the Gardaí "by way of instructing them ... asking them" to attend the scene. This is notable as there have been consistent allegations of collusion between Shell security forces and the Gardaí since IRMS took over security on the Corrib gas project.

On cross examination the defence SC Dignam for Liam Heffernan asked Mr Farrell to explain the corporate structure of his security company.
Mr Farrell outlined that the company is called Business Mobile Security Services Ltd and that Senaca and IRMS are trade names.

It also emerged that the Aughoose tunnelling site had about 20 -25 cameras but footage from only 8 of these were submitted to the Gardaí.

There was a period during cross examination after which the defence barrister accused Mr Farrell of being deliberately evasive:

SC Dignam: Do you know why the protestors were protesting?
Farrell: If you have three people in a row, all have three different answers.
SC Dignam: For example?
Farrell: "I dont know... I dont feel I need to speak for anyone else...Its all hearsay...Do I have to answer that?"
(Judge nods yes)
Farrell: I dont know... They are good people
SC Dignam: "You are being deliberately evasive"
Farrell: "Im not...To me it doesnt matter what the reasons are...The only single reason, I think, is that they dont want it there...I dont get into local politics"

Mr Farrell continued to be questioned over the Shell surveillance operation around Aughoose. Mr Farrell said that there are privacy zones that blacked out homes from view programmed into the system by the camera installers.
Later during cross examination Mr Farrell said: Ive been on the front line of virtually every protest since 2008.

SC Nix continued the Cross examination of behalf of his client Gerry Bourke. He put it to Mr Farrell that before his company got involved in the Corrib project in 2008, that there was no problem with the protests.
He then probed into Mr Farrells military past, confirming that he had been a member of the elite Irish Army Rangers. When asked what is the difference between the Irish Army Rangers and the defence forces he outlined that they were  More heavily armed, better trained, more mobility and that only 2 - 5 % of applicants pass the admittance test.

When questioned, Mr Farrell confirmed that there existed a sort of Olympics between special forces and that the Irish Army rangers consistently score highly, even higher than the Israeli Defence Forces. He also didnt deny that the they learn things from each other at these competitions.

When asked if Mr Farrell had learned anything else from the IDF such as the martial art Krav Maga he replied: I dont know anything about it, but then agreed that it is a martial art invented by the Israeli Special Forces.

SC Nix then asked why IRMS re-branded to Senaca, to which he replied: Dont know
SC Nix asked if his website had offered: International armed and unarmed security
Farrell: If it says it there that would be without my knowledge, and that his company has never provided armed security.
SC Nix asked then if so would that advertising be misleading.
Farrell: It probably is

SC Nix then put it to Mr Farrell that this advertisement was deleted after the Bolivian Fiasco where former IRMS employee Michael Dywer was shot dead in Bolivia. He was accompanied there by another IRMS employee Tibor Revez.

SC Nix asked Mr Farrell what kind of background checks were performed during recruitment?
Mr Farrell: Up to 2009 there was no method to check other than go to previous employers
SC Nix: Were you aware that Tibor Revez was a Neo-Nazi?
Farrell: Not to my knowledge

SC Nix then quizzed Mr Farrell about the Operation Solitaire Shield Nazi-style badges that commemorate the 2008 and 2009 IRMS operations to facilitate the offshore pipe-laying by the Solitaire on the Corrib Gas Project in Mayo.
Farrell: "I had seen it only on the Shell to Sea website or Indymedia"

SC Nix asked if it was coincidental that these IRMS employees show up in Bolivia 3 months after President Morales nationalised gas that Shell have a 25% stake in, and then your website goes down to be updated.

SC Nix then asked about the background of Terry Downes, another IRMS director.
Farrell: Bombs and military

Towards the end of the questioning Mr Farrell said of the Corrib project: Its heavily regulated, all the permits are in place Id have no problem with it
To which SC Nix replied: And the Titanic was unsinkable and the banks were regulated!

The second prosecution witness called was Patrick Doyle, an IRMS security guard.
For the prosecution he outlined events of 23rd June 2013 at Aghoos similarly to Mr Farrell.

On cross examination he was asked about his background. He said that he joined the Gardai in 1974 and served in various locations including Sligo & Blacklion on the Border with Northern Ireland.
He was asked if he had at the time access to army backup to deal with insurgents.

SC Nix asked him if he has daughters, and then asked (referring to the 2011 incident where Gardai unknowingly recorded themselves after arresting two female protestors) What would you think about men laughingly discussing raping your daughters?
Doyle: "Im aware of media coverage only in relation to this incident"
SC Nix: Youve never heard any of this apart from media coverage?
Doyle: Yes

Mr Doyle said that he retired from the force on 15th May 2009 and joined IRMS late July 2010
When asked, he confirmed that he would have been the prosecution officer of some of the protestors on behalf of the DPP.
To which SC Nix said: And you brought your life experience and knowledge of protestors with you into IRMS?
Doyle: No I didnt

SC Nix asked him if he heard coverage about booze being delivered to Belmullet Garda station or the allegation that in 2006 a Garda made sexual remarks to a protestor about his wife.

SC Nix: Do you consider it appropriate for a member of An Garda Siochana to do this?
Doyle: I dont think its appropriate

SC Nix put it to Mr Doyle that the protests changed when IRMS got involved in Corrib Gas
Doyle: I dont agree with that
SC Nix: How many arrests were made while Gilmore security were working on Corrib?
Doyle: I dont know
SC Nix: You dont know because there werent any!

SC Nix asked Mr Doyle if he knew that between May 2007 and Nov 2009, 111 complaints were received by the Garda Ombudsman Commission.
Mr Doyle said that he was not aware of that.

SC Nix: 78 were deemed admissible, 7 went to the DPP and there were 0 prosecutions
Doyle: Im not aware of that
SC Nix: Thats right, nobody gave a damn about them, nobody was interested in their concerns, no one was prepared to hear them.
Mr Doyle: I dont know what their concerns are... there are licences in place.
SC Nix: There were licences in place for banking and regulators in place  they havent worked very well!

Mr Nix referred to earlier testimony from Mr Dickson - the onshore pipeline construction manager, who admitted that he doesnt even have an engineering degree, and asked Mr Doyle: What do you think my clients concerns are?
Doyle: I wouldnt have any concerns... if I wanted to buy land there I wouldnt mind.

The defence called two more former IRMS security guards as prosecution witnesses whose testimony and cross examination were much shorter than that of Mr Farrell and Mr Doyle.

Paul Kileen - who was on duty for IRMS - said of the alleged incident:
There was a lot of pushing and shoving, they were trying to gain entry and we were trying to keep them out.
Its all a blur it all happened so quick
He also said he heard someone say Jim get your men inside before they get hurt

On cross examination, referring to his client, SC for Liam Heffernan asked: He wasnt physically aggressive, would you agree?
Paul Kileen: Yes

The state expects to finish with prosecution witnesses today. The defence will then call witnesses for a number of days to prove that the protest was reasonable, possibly extending into next week.

by Paul Lynch - Shell to Sea

The prosecution finished today.
It looks like there might be only one or two days of defence witnesses.

This is a landmark case and it would be great if some more people could come and do court reports.
There were a couple of days of coverage from the Irish Times but nothing on Friday yet.

Tomorrow and possibly Wednesday campaigners will explain their experiences of the project.

The link is here

Just in -protestors cleared of charges

wo protesters have been cleared of criminal damage resulting from a protest at a Shell compound in north Mayo but still face charges of violent disorder. Gerry Bourke, Aughoose, Pollathomas, Co Mayo, and Liam Heffernan, Kilnagear, Belcarra, Castlebar, Co Mayo, were both charged with violent disorder and criminal damage following a protest at a Shell compound at Aughoose, Pollathomas, on June 23rd, 2013. They pleaded not guilty to the offences before Judge Petria McDonnell in Castlebar Circuit Criminal Court.

The trial, which is now in its sixth day, heard evidence that up to 70 protesters entered the compound and damage was caused to equipment on the site. They refused to leave the compound when asked by security officers and the court heard a running battle ensued, which meant the security had to retreat to an inner compound on the site.

Mr Bourke had been accused of causing damage to heras fencing while Mr Heffernan was accused of damaging timber hand rails while on the site. Following the conclusion of the prosecution evidence, applications were heard in the absence of the jury and as a result of the legal argument, Patrick Reynolds informed Judge McDonnell that the DPP wished to enter a nolle prosequi, meaning do not prosecute.

Judge McDonnell told the jury of eight women and four men that each of the charges of criminal damage was being withdrawn, but the charges of violent disorder remained. Due to further legal argument between the prosecution and the defence, there was no evidence heard before the jurors, who were sent home early by Judge McDonnell. The defence is expected to go into evidence tomorrow.

Well done and thanks for the very interesting court report.
A linked aspect of of these cases are the infiltrators used by the UK police/Gardai and other agencies. See enquiry into Mark Stone/ Kennedy http://www.theguardian.com/uk-news/undercover-with-paul...ected
and
More than 50 campaigners had convictions overturned/were wrongly prosecuted due to undercover officer's activities http://www.theguardian.com/uk-news/2014/jun/26/theresa-...tions

thanks for link mary.

the mark kennedy stone affair was highlighted previously on indymedia too
http://www.indymedia.ie/article/97967

plenty of info and pics etc

http://www.indymedia.ie/article/105478
Indymedia Ireland is a media collective. We are independent volunteer citizen journalists producing and distributing the authentic voices of the people. Indymedia Ireland is an open news project where anyone can post their own news, comment, videos or photos about Ireland or related matters.