Three leading medical journals have refused to publish the results of the first major scientific investigation into the effects of wearing masks on the spread of COVID-19. The authors of the long-awaited gold-standard randomised controlled trial have admitted their findings are controversial and are keeping them secret until their paper has been peer-reviewed and published. The Danish newspaper Berlingske has the details.

The researchers behind a large and unique Danish study on the effect of wearing a mask are having great difficulty in getting their research results published. One of the participating professors in the study admits that the still secret research result could be perceived as controversial.

For weeks, the media and researchers around the world have been waiting with increasing impatience for the publication of a large Danish study on the effect  or lack thereof  of wearing a mask in a public space during the corona pandemic.

Now one of the researchers who has been involved in the study has said that the finished research result has been rejected by at least three of the worlds leading medical journals.

These include the Lancet, the New England Journal of Medicine and the American Medical Associations journal JAMA.

They all said no, says the Chief Physician in the Research Department at North Zealand Hospital, Professor Christian Torp-Pedersen.

However, the Professor does not wish to disclose the journals reasoning.

We cannot start discussing what they are dissatisfied with, because in that case we must also explain what the study showed  and we do not want to discuss that until it is published, explains Christian Torp-Pedersen.

The study was initiated at the end of April, following a grant of DKK 5m [£600,000] from the Salling Foundations [owner of the Salling Group, Denmarks largest retailer]. It involved as many as 6,000 Danes, half of whom had to wear face masks in public over a long period of time. The other half was selected as the control group.

A large proportion of the test participants were employees of the Salling Groups supermarkets: Bilka, Føtex and Netto.

The study and its size are unique, and the purpose was once and for all to try to clarify the extent to which the use of face masks in public spaces provides protection against coronavirus infections.

One of the co-authors, Henrik Ullum, tweeted yesterday they are very unhappy. 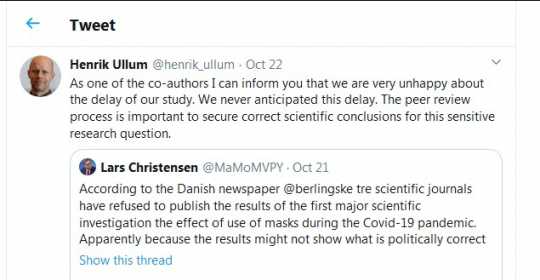 t wouldnt be the first time politics has trumped science amongst those who are supposed to be its guardians. Professor Sunetra Gupta said in September that she was having unusual difficulty getting anything on herd immunity published, and Dr Gabriela Gomes has said the same thing.

I think we can be fairly confident that this mask study  the largest ever carried out  doesnt say what the pro-maskers would like. On October 18th, Alex Berenson revealed on Twitter that one of the studys lead investigators, Professor Thomas Benfield, had said the study would be published as soon as a journal is brave enough to accept the paper.

No courage would be required if the study confirmed Covid orthodoxy.

This video is for the dumb fucks who don't get it

http://www.indymedia.ie/article/107586
Indymedia Ireland is a media collective. We are independent volunteer citizen journalists producing and distributing the authentic voices of the people. Indymedia Ireland is an open news project where anyone can post their own news, comment, videos or photos about Ireland or related matters.