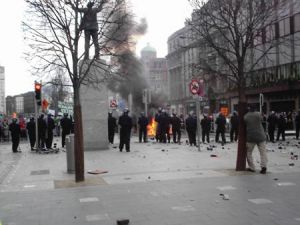 Rioting in Dublin in protest at the marching of the Orange Order on Sat February 25th 2006. Pictures and video. A crowd of 500 counter-demonstrators burnt cars, smashed British-owned businesses and threw missiles and a petrol bomb at Gardai in the center of Dublin as they attempted to stop the march by the loyalist paramilitary associated "LoveUlster" group. Several Gardai were hospitalised.

"A thousand ordinary unionist people are on the buses heading back north right now - just passing Dundalk as I type - and their abiding impression of the Irish Republic is going to be one of being penned into Parnell Square by violent republicans with petrol bombs and of having their right to get their point across stifled - (jeeeez, I mean the irony of republicans penning Protestant protestors into Parnell Square, named after perhaps the greatest ever Irish Protestant proponent of tolerant Republicanism...)"
Comment from David Christopher a Unionist Poster

From the newswire (by kevin): The counter protest against an Orange march in Dublin turned violent today around 12.45pm. Initially the demonstration at the top of O'Connell Street near the Parnell Monument was small but boisterous. Further demonstrators from republican groups were also gathering near the GPO.

Seven or eight coach loads of Orange marches arrived with a Garda escort on the north side of Parnell Square, in front of the Hugh Lane Art Gallery, at approximately 12.30pm. They got out and began playing lambeg drums and whistles, which were audible to the crowds nearby. The marchers lined up to get ready to head down towards O'Connell Street.

Around 12:45pm the crowd at the Parnell Monument had swelled to approximately 500, and were throwing fireworks and fruit at the Gardai, chanting "CIRA". The Public Order Unit (aka Riot Squad) moved in and tried to move people back from the junction. This elicited a shower of rocks and stones from the crowd in O'Connell Street. The building work in O'Connell Street provided the crowd with a constant source of ammunition. Several Gardai were injured by flying paving stones and brought away in ambulances.

A line of Riot Garda then attempted to push the crowd southwards towards O'Connell Bridge. Rocks, stones, planks, paving slabs, slates, and even a petrol bomb was thrown at the Gardai [I have video footage of this, will up it soon]. The rioters built barricades with pallets and metal fencing, which the Gardai had difficulty in passing. They slowly pushed the crowd southwards, with a continuing hail of missiles.

A crowd then branched off towards Merrion Square/the Dail, where it was rumoured a group of Orange marchers were heading. A car was overturned and then set on fire near the National Gallery extension on Nassau Street. Several other cars were then set on fire, as well as windows smashed. The crowd was then pushed back towards the bottom of Grafton St. Several people branched off up South Frederick Street, where the offices of the Progressive Democrats were smashed with chairs from a nearby cafe.

The bulk of the rioters then headed back in the direction of O'Connell Bridge. The Londis at the junction of Aston Quay and Westmoreland Street had its windows smashed with iron bars, and beer and wine were stolen from the shop. The Gardai then baton charged the crowd here. One Garda had a bottle smashed in his face. The crowd was split in three sections by Gardai. One section went down the south quays, attacking the Boots Chemist in the old Virgin Megastore building.

More images and video up soon.

http://www.indymedia.ie/article/74504
Indymedia Ireland is a media collective. We are independent volunteer citizen journalists producing and distributing the authentic voices of the people. Indymedia Ireland is an open news project where anyone can post their own news, comment, videos or photos about Ireland or related matters.