Lisbon Referendum  Some Truth and Plenty of Lies 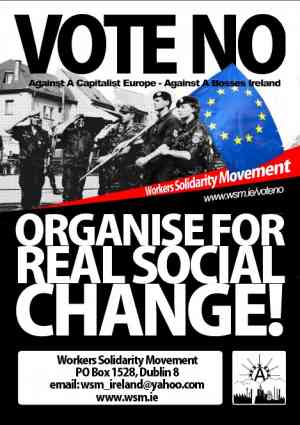 The Anarchists are Voting No!

One of the great problems that people encounter in making up their minds about the Lisbon treaty is that, depending on who you talk to, the treaty can appear to be an altogether different thing. According to those who are campaigning for a Yes vote, it merely serves to tidy up the existing European treaties, with a few changes to allow the EU to function more efficiently.

Related Links:
Voting NO to Llsbon 2 | Big Business Out to Buy a 'Yes' to Lisbon | Lisbon Treaty: Three Strikes, Youre Out | VOTE NO to Lisbon - Raft on the Liffey Launch | Irish Friends of Palestine Against Lisbon put their case to the public in Dublin's Grafton Street | Green Party U-Turn on a Democratic EU | The Lisbon Treaty and the Triumph of Technocracy | Debut of Irish Friends of Palestine Against Lisbon outside Dublin EU Parliament Offices | 13 Things the Lisbon Treaty Would Do | The Legal guarantees on Lisbon Treaty will not change treaty - a propaganda stunt to mislead voters | Dáil shouldn't have inferior Lisbon Treaty powers to German Parliament, controlling ministers | The Lisbon Treaty, Alan Shatter and the guys in hoods! | Lisbon Treaty News: German Constitutional Court delays Germanys ratification of the Lisbon Treaty | No EU Guarantees Can Change Thrust Toward Militarisation in Lisbon Treaty | The Gurantees: Comment by Jens-Peter Bonde | Spoofing the Irish media and public with Lisbon guarantees that guarantee nothing | Supposed hard fight to secure guarantees on Lisbon Treaty: a clever tactic to mislead says McKenna | Lisbon: Round Two - A bosses charter, with or without 'guarantees' | The Lisbon Assurances - A Closer Look

No to Lisbon Groups List can be found here.

According to those campaigning for a No vote, the treaty would sign away national sovereignty, undermine democracy and workers' rights, increase militarisation and override Ireland's social and cultural ethos. And that's without mentioning the numerous alarming claims from the fringes that predict all sorts of catastrophes if the treaty goes one way or the other.

The great confusion surrounding the treaty is not just a consequence of the dishonesty of the political parties and special interest groups that are involved in the campaign, although that certainly doesn't help. The nature of the treaty very much depends on the context in which it is considered. If the general direction and trajectory of the EU is taken as a given and the treaty is considered in isolation, the Yes campaign's interpretation of the treaty appears to be more accurate.

There is very little in it that is likely to bring about any great change to the current political or economic direction of the EU or its member states. The most substantial changes primarily focus on the problem of allowing the EU state to take decisions more efficiently, in a way that is slightly more representative of population distribution.

It's only when you look at the bigger picture that the arguments of the No campaign begin to make sense. The EU is a state in slow formation which largely exists in order to enable the European states to combine forces in order to assert themselves economically and politically on the world stage.

Since its formation, there has been a series of treaties which have seen the member nations progressively cede sovereignty over areas of their affairs to the EU. Perhaps most importantly, the EU has served as a common political front for Europe's industrialists - negotiating trade agreements, setting tariffs and distributing subsidies in order to ensure that European industry remains internationally competitive.

Thus, despite the fact that the Lisbon treaty may not itself contain much that is new, it represents a significant step in further enabling European integration and continuing towards the goal of making the EU a global economic and political power.

This process will involve further centralisation of decision making power, economic reforms that continue to privilege property rights and free markets over social goals and workers rights, the development of a central military capacity and the gradual erosion of national identities in favour of a unified European identity.

Of course, it is unlikely that very many people campaigning on either side of the referendum will be altogether frank. The campaigning will be dominated by political parties and interest groups who are much more interested in winning the contest than they are in presenting a realistic depiction of the treaty to the public.

The big problem for the supporters of European integration has always been that they consider the population of Europe to be insufficiently mature to allow them to honestly consider the arguments in favour of integration. The people are too nationalistic, too economically ignorant and too sentimental to allow the rulers of Europe to openly propose the elimination of their nations and the formation of a European super-state, no matter how rational such a step might be.

Hence, they will concentrate on minute examination of the details of the treaty devoid of context alongside predictions of catastrophic consequences if the people should be so foolish as to reject Europe.

It is worth noting that the treaty amounts to little more than a redrafting of the defeated European constitution and is being presented to the Irish people for a second time, entirely unchanged, after being rejected. Its proponents are certainly not people whom one could accuse of having great faith in the democratic will of the people.

However, the No campaign also faces its own big problem. While it is easy to criticise the current direction of the EU, coming up with a convincing alternative is far more difficult. Rejecting the treaty merely means the retention of the status quo. Particularly in Ireland, its hard to see the EU state being any less democratic, honest, principled or competent than the hapless gombeens who run this place.

When it comes to alternatives, virtually none of the No campaigners are in favour, openly at least, of Ireland leaving the EU. It is indeed difficult to see how such a departure would result in anything other than a total economic collapse and the idea enjoys almost no public support. Those No campaigners who do put forward alternative proposals normally limit themselves to demanding a better deal for Ireland, despite the fact that such demands are generally unrealistic.

What this all means is that, for those who oppose the current direction of the EU, rejections of referenda are pretty pointless by themselves. In the absence of alternative ideas that are supported by large numbers of people, the status quo will reassert itself while Europes political machine will busy itself in coming up with a more successful way of advancing integration.

The real challenge is in coming up with effective ways of convincing large numbers of people that alternatives to the current logic of the EU are seen as both plausible and desirable.

Related Link: http://www.wsm.ie/lisbon
http://www.indymedia.ie/article/93915
Indymedia Ireland is a media collective. We are independent volunteer citizen journalists producing and distributing the authentic voices of the people. Indymedia Ireland is an open news project where anyone can post their own news, comment, videos or photos about Ireland or related matters.